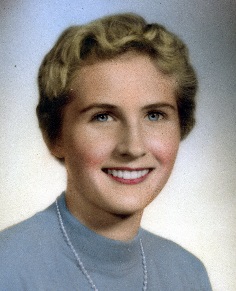 Gouldsboro — Nancy Gould (Hope) Stenger, died January 20, 2019 in Ellsworth. She has moved on to join her parents, Dr. Horace and Mamree Gould; Thelma her step-mother and her son Kirk. She was born November 12, 1939 in Blue Hill.

Nancy lived three lives, one with each family in the 79 plus years of her lifetime.  Nancy met her third husband Rocky at her son’s Halloween party in 1979. She was the waitress from Holiday Inn; he went as the Psychedelic Cowboy.  They were the only grown-ups there. They married on August 16, 1981.  Together they ran a farm at Chicken Mill in Gouldsboro. Her gardening skills were exceptional with at times over an acre of gardens in the fields behind the house. In the spring Nancy would go “seed happy”, one year with 129 tomato plants. She became known for several years as the Egg Lady of Chicken Mill with her 50 plus hens. She supplied the Health food store in Ellsworth with fresh eggs for three years, even thru the winters. They also raised seven pigs over three seasons, even had a near shoot-out with a bear, he got away without a scratch. An unfixed beef critter named Russell became one of her many pets, he dressed out to over eight hundred pounds, she kept the hide and horns. Turkeys, ducks, raccoons and skunks made for a busy day at the farm.  Two dogs with lots and lots of cats.

In 1983 Nancy and Rocky went to St. Thomas for six weeks, he worked at painting an office building, she chased the sun between the banana trees in the front yard and weekends they played tourist with trips to the many beaches, bars and St. John. In the spring of 1986 she became the Video Queen of Chicken Mill Videos.  The business opened with the movie Top Gun and 100 rental tapes. At one point the store had 5OOO tapes and several outlets in the neighboring towns. Nancy and her husband traveled throughout the state peddling tapes; even went up to East Millinocket one winter. February of 1991 Disneyland beckoned and they drove south. After a week in the Magic Kingdom, a stop in Panama City, Atlanta then back north, a stop in South Carolina to fill the back seat with fireworks, then to New York with a ride to the top of the Trade Towers and a return to Maine. August 16 was always a party at Chicken Mill when Nancy and Rocky would celebrate their wedding anniversary. During a routine eye exam in January 1997 the doctors found a tumor behind her right eye, it was wrapped around the optic nerve. The surgeons removed half of it but her vision was never the same in that eye. She went back to work and in 1998 acquired another title, The Tanning Madam of TAN & DVD.  First with a 24 bulb bed in the upstairs of the store then a 28 bulb bed two years later. At one point both beds were humming all day long.  By this time the business had replaced the VHS rentals with a thousand DVD rentals.  Progress in the form of Cable, Satellites and Net- Flicks didn’t help and a lot of deadbeats that owed her money eventually closed the DVD rental business followed by an awareness of her Tanners that the electric beach may not have been all that healthy. The business closed in the summer of 2013.

In the years before her father’s death she went fishing with him in early June. They spent many days on Moosehead Lake, and froze all their catch. During all those years she was the master of the Chinese Checker board. Summer and winter nights were spent partying and playing with the marbles that matched her blue eyes.

Nancy wrote the following a few years ago:

“My name is Nancy Gould Stenger. I am Miley’s really great grandmother on Heather’s side. Born in the last century 11/12 /39, I lived three different lives. One with each husband, one with each child, one with my future, your past. My families were my life. Cats were my passion. Mowing the yard and gardening were fun for me… There is nothing any nicer then smelling the lilacs and apple blossoms. Sweet memories will be with you always.”

She leaves behind an older brother, Robert Gould and two children, Heidi Seavey and Ted MacGregor and their children and grand-children. Nancy had 20 decedents in all including her loving husband Rocky.

Services will be held in the spring.  Arrangements by Acadia Burial & Cremation Direct, 248 State St. Ellsworth.  Condolences may be expressed at www.acadiacremation.com