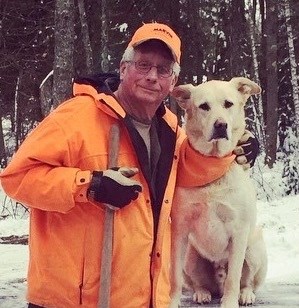 Lamoine — Gary William Stanley, devoted husband and loving father and grandfather, passed away unexpectedly at home in Lamoine on November 27, 2017 at the age of 67.  He was born July 27th, 1950 to Alfreda and James Stanley of Trenton.   Gary, also called “Boodles”, enjoyed his childhood as a typical Boy’s Life, exploring the woods and waters of Trenton, hunting rabbits, and pedaling around town peddling his “Fat Clams.”

He graduated from Mount Desert High School even though much of his teen years were spent hunting deer, driving (or racing) around in his Morris Minor, and participating in good natured hi-jinks.

After graduation, he enlisted in the Coast Guard and served from 1968-1972. He was fortunate in that most of his duty was sailing the coast repairing lighthouses.  His fun loving ways continued in the service including inviting his lobster-loving instructor home to visit. That visit blossomed into a longtime friendship between their families.

Back at home, he met Kathleen Salsbury, the new friend of his sister, Gail.  She fell in love with his selflessness and the kindness with which he treated everyone he knew.  They married in Town Hill in 1975. After settling in Lamoine, children soon followed, and he found that being a father was his true purpose in life. As an avid outdoorsman he took his family on many camping trips, snowmobile rides, and outdoor adventures.  Lots of fun was had at Rock Crossing Lodge and the family camp on the Jordan River.  He attended every recital, concert, play, ball game, and cross country meet in which his children participated.  He was a scout leader and assistant baseball coach.  He followed his three children from Presque isle to Portland during their school years as he and Kathy chaperoned many class trips and overnights.  When the children “left the coop”, he flew from Syracuse, to Florence, Italy, to Baltimore, Los Angeles and even Panama to see them. If he could find a way to be near his children on their travels, he and Kathy would.  He was so proud of them and always encouraged them to follow their own path.

To support his family, Gary followed his father’s footsteps as a carpenter, but in 1981, started working at Bangor Hydro Electric Company.  He started as a meter reader, but worked his way up to a lead planner.  He was a well respected employee, often recognized for his customer service.   He retired in 2012.  During his career and in his retirement, he supported his wife’s business endeavors and was a fully committed property manager. He and his dog, Charlie, were a welcome fixture at Sewing by the Sea.  He built stuff, fixed things, lugged things, and entertained as well.

Gary also spent time in “civic duty” as a member of the Lamoine Volunteer Fire Dept., a selectman, a Mason, and Shriner.

Services will be held at Lamoine Baptist Church Sunday, December 3rd at 1:30 p.m.  In lieu of flowers, friends may donate to the Lamoine Volunteer Fire Department, 606 Douglas Highway, Lamoine or WERU community radio at WERU.org.