On May 23, 1931, in the village of Springfield, a daughter, Joanne Lula was born to Eric and Eula (Averill) Ham.

She grew up on the family farm and was very much loved. She graduated from Lee Academy, salutatorian of the class of 1949. Joanne attended Eastern Maine General Hospital for a short time, studying nursing; a skill she would use taking care of West Street (Princeton) neighborhood children.  In 1951 she married F Dale Speed, the love of her life.  Together they had three children, Eric Dean, Suellen Dale, and Jon Alan. She dedicated her life to doing the very best for her children and their children. She loved being a mother and nana.

Joanne’s work history included the IGA, the Co-operative Extension service, and the Princeton Variety.  Besides spending time with family Joanne enjoyed gardening, lawn mowing, pitcher collecting, and fishing.  She was also a great shot with a 4-10.

She passed, July 16, 2022, at her daughter’s home, in Ellsworth.  She was predeceased by her parents, her loving husband, Dale, her son, Jon and her brother, Rodney Ham. Among those she leaves behind are son Eric and wife Sandy, and daughter Suellen Speed and Douglas Jones.  She also leaves behind Eric and Sandy’s children Mark (Alyssa) Speed; Jennifer (Brandon) Stonehocker, and Jon’s children; Erika (Tony) Young, Andrew (Lori) Speed, and Benjamin (Sarina) Speed.  Others she leaves behind include her precious great grandchildren, Jamison, Kallen, and Landrie Speed; Declan and Brycen Young; Noah and Larkin Speed; and Kaya Stonehocker; nieces, Tina Padilla and Lori Moore survive their Aunt Joannie, as does sister-in-law Christine Ham.

We love her more than seems possible, and cherish the time we had with her, as well as the memories we made with her. She was the best. 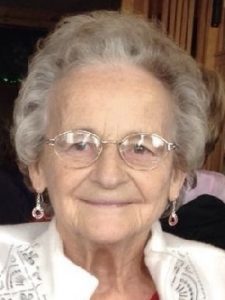 t her request there will be no public service.  Her ashes will be placed in the Princeton Cemetery.