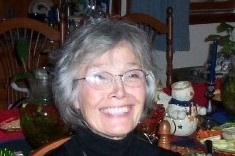 Sorrento — Ruth E. (MacLeod) Main of Sorrento, formerly of Rockport, MA, passed away peacefully at home on February 7th, 2018. Born July 18th 1936 in Gloucester, MA, Ruth attended Gloucester High School where she met her husband of 57 years, John E. Main Jr. They married in 1954 after graduating high school and moved to Troy, NY where John attended Electrical Engineering school at Rensselaer Polytech. Later, they moved back to Cape Ann and built a home in Rockport. After raising 3 children, Ruth went on to become an R.N. and worked at Addison Gilbert Hospital and the Cape Ann Medical Center before retiring to pursue her love of painting.

She was a member of the North Shore Arts Association, the Newburyport Art Association. and the Rockport Art Association, where she served as tour director for numerous painting trips and museum tours. Ruth enjoyed painting in the month of September and a few, wet, Junes on Monhegan Island off the coast of Maine for more than 20 years with her daughter and fellow painter, Diane. She organized many painting groups for the Rockport Art Association and traveled to Europe many times. She was once detained in Scotland with her fellow artists during the 9/11 Twin Towers bombing. She was an active member of the Cape Ann Watercolor Painters and part of numerous exhibitions including such venues as the Federal Reserve Bank of Boston.

Known for her cooking and gardening skills, Ruth was the host of many parties and celebrations at her home in Rockport where she enjoyed gardening extensively, creating brick pathways and an authentic Finnish fence. An avid swimmer well into her 70’s, she went daily, late into the fall, to Steele Derrick Quarry with her friend, Connie Sklivas, where they practiced synchronized diving from the steep, granite cliffs. She was also part of the original New Years Day swim at Front Beach in Rockport.

Following the death of her husband, John in 2011, Ruth moved to Sorrento, ME to be with her daughters, Diane and Joanne, where she met new friends and lived with Diane, helping in the garden, joining the rug hooking group at Chapter Two in Corea, and even going on a road trip to pick up honeybees with Diane, traveling for hours with bees in the back seat.

A celebration of Ruth’s life will be held in the spring.