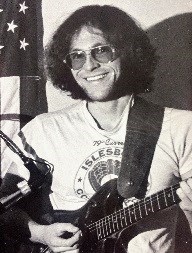 Ellsworth — David Sturtevant Palmer, 64, a longtime resident of Islesboro, passed away on March 21, 2019 at the Seaport Village nursing facility in Ellsworth where he had lived since 2015.  David was born in Bangor on January 18, 1955.  His parents were Rev. Warren Sturtevant Palmer, a congregational minister in Lincoln and Sanford, and Anna Lou (Carmichel) Palmer, a social worker for the Sanford school system.  With the exception of two years following the death of his father in 1964, David was educated in the Sanford schools, graduating from High School in 1973.  He received a Bachelor of Science degree from Nasson College in 1977 and a Masters degree in psychology from Cornell University in 1980.

After having spent the first 35 summers of his life at Islesboro, David became a full time island resident in 1990.  David’s passion was popular music and over the years he was a member of several rock and roll bands, playing guitar and keyboards.  He also learned the arts of mixing and recording music. His other favorite activity was juggling.

David was diagnosed with amyotrophic lateral sclerosis (ALS) in 2011 and spent the final 8 years of his life managing to live with this terrible affliction with remarkable dignity, showing gratitude to the many people who provided care and comfort to him, first at the Boardman Cottage residential care facility on Islesboro, and then at Seaport Village.