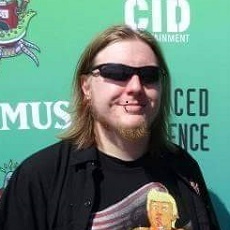 Nicholas Tait Alley, 32, son of Ronda and Rick Alley and brother of Briann died unexpectedly on Saturday, May 16th, 2020 at his home. Nick, aka Dick Sally and Nicholas Delavega, questioned everything and apologized for nothing.

As a young child his bright eyes and boundless energy let others know that life was meant to be lived. He laughed, loved, and played hard. As an adult he loved to cook and experience new adventures, many of them with friends traveling throughout the country to attend the concerts of his favorite bands: GWAR, Primus and Dog Fashion Disco to name a few. He even spent a few months on the road in 2013 with his special friends in the band Downtown Brown.

Nick was a connector of people through his love of music and was a friend to everyone. His favorite place was the Kave in Bucksport, a place where he played drums in various bands and got to explore who he was as a musician. Two highlights in his career were made with his band mates in the band Salvo: winning Battle of the Bands and opening on the Bangor Waterfront at Smackfest in 2010.

This past year, under the tutelage of Helen Douglas, he was learning Reiki and began studying A Course in Miracles and with his brother-in-law, Pete Neblett’s assistance was learning to repair gaming systems.

Nick absolutely loved being an Uncle to Asa and Stella. Their presence in his life was a true gift and they will miss him terribly, as well as all of his family, friends and those he connected with in the Maine music scene.

A concert in his memory will be held at a future date. In the meantime, enjoy the memories you made with Nick, challenge yourself to try something new and look upon all fellow humans with unconditional love.