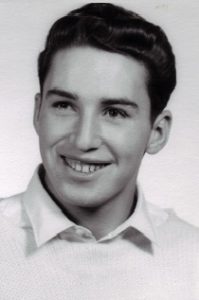 Hancock
Robert (Bob) Bruce McKenney, 76, died unexpectedly August 31st, 2022, at a Bangor Hospital. Bob was born Dec. 27, 1945, in Skowhegan, the son of Bernard and Virginia (Cook) McKenney. He graduated in Madison where he met his high school sweetheart, Donna Jean Bahr, who became his wife of 55 years.
Bob and Donna lived in the Madison area until they moved to Ellsworth in 1973 where they raised their five daughters. During his early life Bob held various positions from selling insurance and Kenworth trucks to auto body repair, often working multiple jobs at a time to provide for his family. He joined the Ellsworth Fire Department as a volunteer in 1976, continuing on to be a full-time engineer and retiring as Chief in 2006.
While Bob devoted so much of his time and energy to his career, he always made time for family and friends. He had numerous interests and hobbies throughout his life, including football, bowling, softball, fishing, snowmobiling, and auto racing. Some of his most enjoyable activities were spent with Donna, whether it be on the dance floor or on a camping adventure. In his most recent years, he cherished time spent together with his children, grandchildren, and great grandchildren as well as golfing, playing cribbage and reading. He was a member of the Lygonia Lodge #40 and the Ellsworth Elks Lodge #2743.
He leaves behind his five daughters and their spouses, Tammy and Andy Andrews, Tracey and Todd Blankenship, Trudy Martin, Tara and Craige Williamson, and Tristan and Will Hardison. Also, his nine grandchildren, Megan (Brandon); Amanda (Greg); Andrea (Will); Paige, Shelby, and their father James; Danel (Tedd); Blake, Damon, and Josie. Two great-grandchildren, Brandon and Lillian. His sister Donna Tozier (Donald) and brother-in-law Dan Bahr (Risteen) and sister-in-law Gail McKenney, as well as many cousins, nieces, and nephews. Bob has eternally joined his wife and parents, his brothers Carl and David (Lil) and his mother-in-law, Lillian Tully (Don).
His family invites all to gather at 3pm Friday September 9th, Lygonia Lodge, Carriage Way, Ellsworth. A Celebration of Life will follow at 4pm.
Family, friends, and community members are encouraged to share memories of Bob at www.acadiacremation.com.