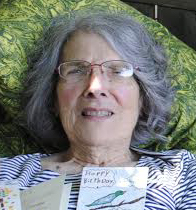 BAR HARBOR, ME — Jean Maffucci (nee Ginocchio), ended a long and well-lived life on Saturday, December 23, 2017.  She was 91. Jean is survived by her three sons Thomas and Douglas, both of Bar Harbor, and Christopher of Somerville, Massachusetts, as well as eight grandchildren, Alexander, Enrica, Marcus, Tessa, Juliana, Christopher, Gabriel and Matteo.  Jean was predeceased by her husband of 52 years, Christopher Maffucci.

Jean was born in New York City on June 29, 1926 to Vittorio Pietro and Enrica Conti Ginocchio.  In June 1944, she graduated from high school and began working at Bell Laboratories in Manhattan.  In 1949, she married Christopher Maffucci, and the couple settled in Lynbrook, NY.  They later moved to Malverne, NY and eventually, to Cross River, NY.

Jean was, as her husband used to say, sui generis.  In addition to being an outstanding spouse and mother, Jean had a varied work life.  In the 1950s and 1960s, she worked  at her husband’s law practice and assisted with his publication of a Long Island weekly newspaper, the Maileader. During the summer of 1969, Jean and her three school-age sons spent the summer operating a public golf driving range in the Catskills.  In 1973, Jean opened a flower and plant shop in White Plains, NY.  Through her business, Jean was responsible for introducing the now-popular anthurium andraeanum flower to the United States.  In the late 1970s, Jean embarked on a new career in the hospitality industry brokering rooms and booking events for New York area hotels. She retired in 1989 and moved to Somesville with her husband, Chris.  After his death in 2002, Jean moved to Bar Harbor.

Jean had a lifelong interest in the arts. As a young woman, she studied at the Art Students’ League in New York City.  She was an accomplished sculptor who supported and encouraged many young artists over the years.  Jean’s other interests included classical music, birding, and gardening. Although she may not have counted it as one of her interests, Jean was an outstanding and generous cook who brought joy to the hundreds of people fortunate enough to be seated at her table over the years.

Jean will be remembered as a devoted, kind, generous and always interesting family member, friend, and neighbor.  She was an active parishioner in the Holy Redeemer Roman Catholic Church in Bar Harbor.