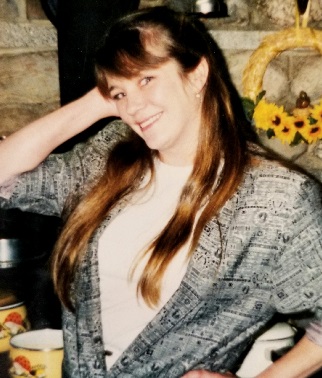 “Baby” Beth Ruth Mace, 58, peacefully passed away May 3, 2020, at her family cabin in Osborn, after a long battle with liver cirrhosis. She was born Dec. 18th 1961 in Bangor, the youngest of four children to the late Ansel “Jeff” Jefferson Mace, her step-father Walter “Mac” Makevich & Elizabeth “Betty” Mace Makevich of Aurora.
Beth graduated from Brewer High School, Class of 1980. Her first cousin Brandon Siemion of Furlong PA, remembers her as being “popular and the apple of many boys eyes.” Not only was she beautiful, she was also a blossoming artist with a scholarship to art school but decided to pursue music instead. She met her first love Adam Facciolo in 1982, marrying in 1985. He was a musician from New York & she soon she found herself singing & playing the keyboard in Sea Breeze, a local rock band. She was always the life of the party, often bringing the house down with her renditions of Bonnie Raitt & Patsy Cline favorites. With the birth of her babies, along with a change in career to tending bar, the goddess “Baby” Beth Mace, the charismatic fun-loving bartender we all knew & loved was born. She tended bar in Ellsworth, most notably at Sonny’s Tavern (aka Peppers Pub) & The Oyster Bar.
When Baby was not at the bar, she was painting or adventuring in the woods. She loved creating beautiful landscapes, with her man Bob Ross. Her favorite holiday was Halloween & it was always her goal to win best costume. For many years, she set up a stand on the side of the road to sell her hand-painted pumpkins, featuring every cartoon character you could imagine! In 1986 the local paper dubbed her “The Great Pumpkin Painter” & years later she was featured again for painting Cadillac Mountain on an 800 lbs. pumpkin! She was also a self-employed sign painter who painted the Maine Mountain Maine Sign, that was once in Franklin & the old Maine Luau sign in Trenton.
In her 30s she moved away from the bar scene & married her best friend from the pub Charlie Wilbur. She picked up a job as a baker, at the Village Green Bakery in Bar Harbor, while there she once baked & decorated over 2000 cupcakes for vacationers aboard the QE2.
Never afraid to get her hands dirty, her favorite pastimes were fiddle heading with her Mom Betty & fishing on Chemo Pond with her step-dad Mac. She enjoyed the outdoors – hunting anything from big game like Moose, to little game like squirrels – she did it all & had the trophies to prove it!
Along with her late sis Jaye Mace Pullen, she shared a love of horror movies & books (especially anything Stephen King). They were like two peas in a pod, “standing tall” till the very end. Their crude, sometimes morbid since of humor, will truly be missed. Baby was “tougher than a boiled owl,” a kindred spirit with a charismatic personality that could light up any room – she will forever live on in the hearts of her friends & the large family she has left behind.
“Baby” Beth was survived by her children; Alexander Facciolo of Sullivan, Halley Jaye Facciolo, Joshua Wilbur both of Ellsworth, her only grandchild Maddi-Jaye Facciolo, her brother Albert Mace of Bangor, her nieces Elizabeth Mace-Giosia of Federal Way Washington, Brittany Mace, her nephew Bobby Leighton of Bangor, her many many cousins Mary & Edward Healey of Amherst, Kelley Dennis of Los Angeles CA, Danny Siemion of Sullivan, Tracey O’Connell of Orono, Michelle Libby of Northeast Harbor to name a few (Mace’s, Butterfield’s & Siemion’s near & far you know who you are), her aunt & uncle’s Don & Charlotte Whitman of Aurora, Ellen & Arthur Butterfield, Cary & Charlene Butterfield of Clifton, her special long-time buddies Anthony Hall of Milbridge, Elizabeth Roberts of Eastbrook, Dexter Marvin Smith of Franklin & her partner in crime for 18 years Charlie Wilbur of Franklin. She was predeceased by her parents, her brother Asa & sister Jaye Mace.
Friends and family are welcome to join in her burial, which will tentatively be held Saturday August 22, 2020 at 2pm at the Aurora Cemetery, followed by a fun-filled Celebration of Life (costume optional) in Ellsworth. Location & more info will be given closer to the date, on an event Facebook page. Condolences and memories may be shared at www.jordanfernald.com.