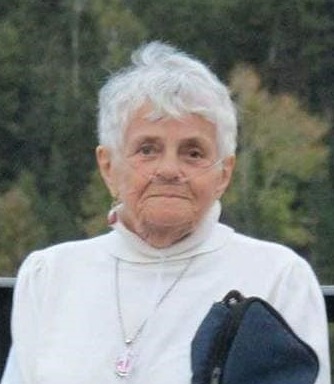 Sullivan
Loretta Mae Sutherland, 78, died peacefully at home on December 5th surrounded by her three daughters, Pamela Lent, Becky Sutherland, and Cheryl Parker. Loretta was born August 14th, 1942 in Steuben, she was the daughter of Ernest and Kathleen (Pinkham) Hanington.
Loretta graduated from Sumner High school in 1960. Shortly after graduation she married the love of her life John Edmund Sutherland. They were married on October 1st, 1960. They were married until his death on February 22nd, 2015.
She then pursued her career as a domestic engineer. In Loretta’s later years she had a career with the former Stinson’s Canning Company, from March 1981-April 2010. She held several positions at that job; upon her retirement she was assistant supervisor.
Loretta is survived by her three daughters, Pamela Lent and her husband Robert of Monmouth, Becky Sutherland of Sullivan, and Cheryl Parker and her husband Fredrick of North Waterboro. Her three grandchildren and five great grandchildren; Timothy Kachel and his wife Jessica, their children, Harrison, Corinna, Oliver, Holden and Ramona; Patrick Lent and Michael Lent. She is also survived by her beloved four-legged children Rascal and Hazel. Loretta is also survived by three siblings George, Lois, and Dale and his wife Jean. Loretta has several nieces, nephews and many special friends including her companion of several years Gerald Gordon.
There will be no services at this time. In lieu of flowers, donations can be made in Loretta’s memory to the Sullivan Fire and Rescue, 1888 US Hwy 1, Sullivan Maine 04664.
Arrangements by Acadia Burial and Cremation Direct, 248 State St. Ellsworth. Condolences may be expressed at www.acadiacremation.com.