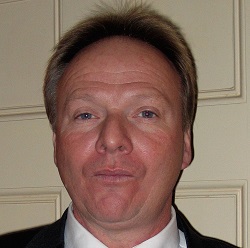 Jeff was born in Osh Kosh, Wisconsin on August 22, 1956. He received his undergraduate degree from Evergreen State College and his master’s degree from Northeastern University. Although he studied Political Science, he earned his living with his hands. He spent many years building pipe organs, then boats, and eventually started Beech Hill Woodworks, his furniture and cabinet shop on Deer Isle.

A man of tremendous integrity, curiosity, unfailing kindness and imagination, he will be deeply missed by his wife Katy Helman, his chosen daughter, Meaghan Robinson, his family, his friends, as well as his two Scottish Terriers, Bell and Whistle.

A sincere thank you to the medical community – to Oncology at Blue Hill Memorial Hospital, Island Family Medicine, Beacon Hospice, and Seaside Pharmacy – all of whom helped us through this difficult time. And a special thank you to Dr. Daniel Cassidy who went above and beyond in his thoughtful care of both of us. This would have been far more painful without everyone’s team work.

And to all our friends and the Island community, you have shown us astonishing compassion and support. Jeff was a guy who always “showed up” and so have you. A heartfelt thank you. I can’t imagine going through this in any other community.

The message he leaves behind is for everyone to get regularly scheduled colonoscopies to avoid his ordeal of the past 20 months.

For those would like to attend, there will be a brief gathering in our field at 10 Beech Hill Road, Deer Isle on December 3nd at 3:00pm, followed by food at our house.