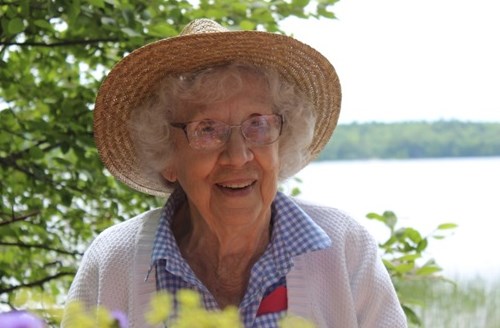 Blue Hill — Alice Bertha (Simmons) Lannon Hauser, just shy of 99, died at Eastern Maine Medical Center in Bangor on March 4, 2017, due to complications after a fall. Born on April 5, 1918, in Central Falls, Rhode Island to Harry Thayer and Emma (Shoenfeld) Simmons, she resided in her family home until moving to Maine in March 2007.

She married Lawrence Edward Lannon in 1940 and they had two children, Larry Jr and Barbara Lannon Malm.  She worked at Shartenberg’s Department Store in Pawtucket, Rhode Island, as an assistant buyer and later as a bookkeeper at Haskell’s Manufacturing Co. She was an active member of St. George’s Episcopal Church in Central Falls, Rhode Island.

After being widowed in 1964, she remarried John Edward Hauser in 1978. They enjoyed traveling together, especially to London. He predeceased her in January 2005. She was also predeceased by her siblings, Freida Emma (Barbara) Simmons Savage and George Harry Simmons.

When she and her kitty moved to Parker Ridge Retirement Community to be closer to her daughter and son-in-law, Barbara and C. Richard Malm, she began a whole new chapter in her life. She was an engaged member of the Parker Ridge Community, thanks to the welcoming staff, always ready to try something new or to go somewhere. But, the highlights of her week were volunteering at Turn Style Thrift Shop on Saturdays, for nearly 10 years, and attending services at St. Francis By the Sea Episcopal Church.

She moved into Parker Court Assisted Living in late December 2016. The family would like to thank the amazing staff that gave her exceptional, loving care.  She brightened many people’s lives by her ability to make each person feel special.  She lived life to the fullest, never thinking of herself as old.

A celebration of her life will be held at St. Francis By the Sea Episcopal Church in Blue Hill at 2 pm on Saturday, April 8. Donations may be made in her memory to Turn Style Thrift Shop, PO Box 1329, Blue Hill, ME 04614 or St. Francis By the Sea Episcopal Church, 330 Hinckley Ridge Road, Blue Hill, ME 04614 or the Ark Animal Shelter, 60 Barber Lane, Cherryfield, ME 04622.