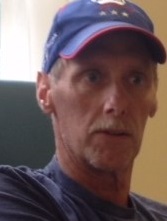 Southwest Harbor — Michael Wayne Hanson passed away on April 1, 2018, with his daughter by his side.  Michael was born on March 6, 1963, in Rockland and raised by his parents, Fred and Emma Cunningham in Bar Harbor.  Michael attended Mount Desert Island High School and soon after married Jessica McIntire.  Michael and Jessica had one child together, Logan Hanson Lawson.

In his younger years, Michael worked in the local restaurant industry at such places as the Acadia Restaurant, The Moorings Restaurant, and Billie’s Place.  In 2010, Michael started lobster fishing with several local fishermen.

Michael loved the outdoors and working on his various building projects such as building chicken coops.    Most of all, Michael loved spending time with his daughter and granddaughters.  He was happiest when they were together going out to breakfast, watching TV, fishing or hunting for gems in the woods.   Time together with his family was what he cherished the most.

Michael was predeceased by his parents, Fred and Emma (Hanson) Cunningham. He is survived by his daughter, Logan Hanson Lawson and husband, Dustin Lawson and three granddaughters, Peyton, Kara, and Arya; his brothers, Jack Cunnningham and his wife, Beth and their three sons, Jared, James, and Samuel; Tommy Hanson, Billy Hanson, Steve Hanson and nephew Steve Hanson, his ex-wife and close friend, Jessica McIntire and her daughter, Brandy Hauser; close friends, Bill, Tina, and Marshall Reiff, Tommy and Sherri Alley, and Missy Morse.

A service will be held at a later date.  Donations to his memory made be made to the American Cancer Society at:  https://www.cancer.org/involved/donate/memorial-giving.html