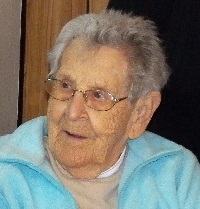 Beulah was born on May 10, 1922 to Clifton Grindle and Villa (Saunders) Grindle.

There will be a gathering at the graveside at Camp Stream Cemetary in Sedgwick, on September 23, 2017 at 2:00 pm for anyone who would like to attend.