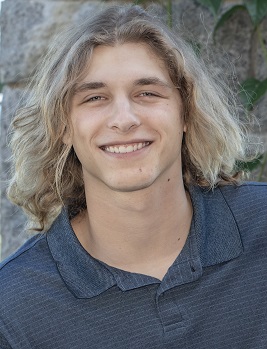 BANGOR
In loving memory of Evan Michael Soukup, who passed away on July 7th, 2021 at Eastern Maine Medical Center, surrounded by his loving family, following injuries suffered as a passenger in a car accident.

Evan’s is a story of love. He was born in Alexandria, Virginia, just a few minutes before his twin sister Jessica. Evan was sweet boy and maintained an endearing innocence. He was so easy to raise, since he and his twin were inseparable and had their own playworld and easy companionship. He was shy, avoiding places with “too much children”, but made friendships easily and deeply. He was homeschooled for five years, and often was found during school hours upside down on his recliner, under a blanket, lying next to his beloved dog Daisy, or in the woods, one of his favorite places. He rode horses for five years and was a graceful equestrian. He attended the Bay School for one year to transition to high school, when he attended George Stevens Academy. Evan was a varsity swimmer for four years, setting school records despite hating swim meets, and attended the University of Maine for two years, studying Marine Biology, despite disliking reading and having attention challenges.

Since leaving college Evan was continuing his passion for fixing up anything with a motor. He liked to design things and was learning carpentry, enabling him to renovate his own home. He also worked as a sternman year-round and was described by his captain as the best he’d ever encountered—always on time, always working hard, and always in a good mood. Evan loved the water and the freedom and stunning beauty of the ocean and Maine coast.

Evan was loving and full of gratitude. He was polite, thoughtful, wickedly funny, and optimistic. He was independent and sometimes exasperating, but never to cause his family distress, but only because he could only follow his own path and be himself. He never followed a trail, but blazed his own way.

Evan is survived by his parents, Michael Soukup and Linda Soukup of Blue Hill; his twin sister Jessica Soukup, also of Blue Hill; his older brother Mark Soukup and his wife Kimberly Soukup, and their sons Nicholas, Connor, Colin and John, of Lincoln, MA; his older sister Rebecca Eiler and her husband David Eiler, their son James and their daughter Lauren, of Hanover, NH; his aunt Donna Brennan and his Uncle James Brennan of Estero, FL; his uncle John Blessing and his aunt Angie Blessing, of W. Lafayette, IN; his girlfriend, Haleigh Hanscom, of Blue Hill, and countless other family members and friends too numerous to mention.

Evan’s memorial will be held on Saturday, July 17th, at 3:00 p.m. It will be held behind Rockefeller Hall at the Schoodic Institute on Acadia Drive in Winter Harbor, ME, and will be followed by refreshments. All who cared about Evan and his family are welcome. His family requests that each person wishing to, can bring a written reflection about Evan, as well as a photograph if possible. The reflections can be read at the memorial, or can be read by a family friend, and will be kept by his family. In lieu of flowers, please consider a donation to the Blue Hill Heritage Trust, which manages so many of the special places where we hiked together as a family. (https://bluehillheritagetrust.org/donate-2/. Please note there that your gift is in memory of Evan).

His family also wishes to gently suggest, to everyone reading this obituary, that if anything has been left unsaid or undone, between you and your loved ones, with the belief it can be said or done tomorrow, say or do it now. “Time and chance happeneth to us all” (viz. Eccl. 9-11), and no one is guaranteed tomorrow. Finally, Evan chose to be an organ donor and saved and enhanced many lives. His family honors that choice and wishes to let others know it was the first ray of light in our darkest time. Evan will be terribly, terribly missed.

Arrangements by Acadia Burial and Cremation Direct.
Condolences may be expressed at www.acadiacremation.com.