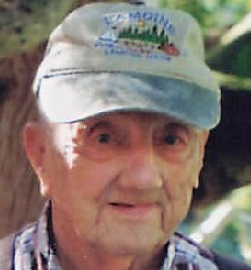 Almond “Buddy” Eaton, Jr., 97, passed away peacefully at Northern Lights Maine Coast Memorial Hospital on December 30, 2021 of complications from Covid-19 with his family by his side. He was born in Ellsworth on October 4, 1924, the son of Almond and Eunice (Garland) Eaton.

After graduating from Ellsworth High School, Buddy enlisted in the U.S. Army and shipped overseas to fight in WWII. Upon his return, he met the love of his life, Virginia “Ginny” Hanscome. This would be the start of nearly 70 years of marriage. Buddy and Ginny made their home in Lamoine, raising 4 children.

Buddy loved spending time with his family and friends whether at home or at camp on Molasses Pond. During the summer months, he spent countless hours planting and maintaining his vegetable garden.

He was an avid sports fan following all of his children’s and grandchildren’s sporting events. He was a true fan of the Boston Red Sox, New England Patriots, and Boston Bruins; he very seldom missed a game even at 97 years old. He enjoyed hunting and fishing as well. In his later years, he enjoyed sitting on his porch feeding and watching his birds.

He is survived by his daughter, Jane Shea and husband, Stephen; sons, Allie Eaton, Ill, Bruce and wife, Linda, and Kenny Eaton; grandchildren Jennifer Shea-Giffin and husband, Joel, Missy Shea and her partner, Jason Heckman, Anthony Eaton and his wife, Jocelyn, Jesse Eaton and his wife, Lisa, and Kristopher Eaton and his partner, Kayla Boone; great-grandchildren, Emily and Sam Giffin, Madeline, and Lydia Hart, and Donovin Eaton; many nieces and nephews; and special nephew Eddie Douglas. In addition to his parents, Buddy was predeceased by his wife, Ginny and sister-in-law, Helen Douglas who cared for him until her passing.

Buddy was able to live in his home until his illness with the help of his adoring son, Bruce, daughter, Jane, and his wonderful caregiver, Cassidy Mathis, whom he adored so much.

The family would like to thank all of the doctors, nurses, and staff at Northern Lights Maine Coast Memorial Hospital for their wonderful care given to Buddy at the end of his life.

There will be a celebration of his life at a later date. Those who wish to remember Buddy in a special way are encouraged to make gifts in his memory to the Hancock County SPCA, 141 Bar Harbor Road, Trenton 04605, or any local veteran organization.