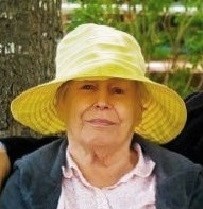 Seal Harbor — Pauline P. Durost, 90, on September 6, 2017, went to be with her Lord and Savior, Jesus Christ, and now has the perfect new body, that He promises, for those who have confessed their sins, and accepted His forgiveness, by asking Him into their heart.  She was born, in Farmington, Maine, as Pauline Marion Phillips, to parents, Hazel Gertrude (Sargent) and Perley Dewitt Phillips, on June 5, 1927.

After graduating from Farmington High School in 1944, she became a bank teller for Franklin Savings Bank, and walked to work, by the residence of what became the love of her life, David Leonard Durost, who was a student at Farmington State Teachers College( UMF).  Using her spelling and typing skills, she helped David get through college. After David graduated, he married Polly, on June 22, 1951, in Lisbon Falls, where David’s father, Rev. Morley J. Durost, performed the ceremony. During the course of their marriage, they lived in Farmington, where Beverly and Dale were born, Doylestown, Pennsylvania, where Debbie and Paul were born, Northeast Harbor, for a year, and finally, Seal Harbor, where Polly resided for nearly 51 years. Her greatest talent was sewing.

Pastor Gerry Dill will officiate at a graveside service, at the Seal Harbor Cemetery, on September 30, 2017, at 1:00 p.m. Many thanks to DaVita Dialysis, Meals for ME, and Island Connections, for the wonderful care, food, and transportation they gave Polly over the years.