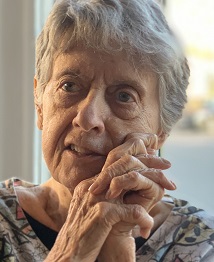 Dr. Mildred L. Byrum, beloved wife, mother, therapist and friend, died peacefully at her home in Surry, ME May 13, 2022, surrounded by her family, wife Marcia Tompkins, daughter Sharana Byrum, and son-in-law Jesse Benjamin. Millie was a warm, kind, honest person, full of integrity, who valued the importance of feelings of all kinds, felt or expressed. She will be greatly missed.

Millie suffered a stroke six years earlier but had made significant progress.  Since November she was living with kidney failure. Her death was caused by these accumulating health issues, exacerbated by a recent fall in her home.

Born in the depression, she was the first in her family to go to college, paying her own way working in the college cafeteria and later in local health and children’s institutions.  She graduated summa cum laude in the late-1950’s and achieved her Ph.D. in the mid-1960’s in clinical psychology.  Shortly thereafter, she moved to NYC with her infant daughter where she lived happily the majority of her life as a New Yorker.  For 30 years she was the chief psychologist for Hamilton Madison Settlement House, while maintaining a private therapy practice for more than 50 years.  In her 70’s, she achieved a long-held goal of becoming a psychoanalyst, studying with Martin Bergmann and Murray Salinger.

She learned Mandarin, studied, and practiced meditation, and later became a gifted artist and watercolorist.  Long time summer residents, she and her partner of 53 years moved full time to Maine several years ago.

A memorial service will be held 3:00pm, Friday, May 20, at The Gatherings, Surry’s Community Center.  The family asks that in lieu of flowers, donations be made to Millie’s favorite charities: Doctors Without Borders, Sustainable Harvest International, or any local no-kill animal shelter or sanctuary. Condolences may be expressed at www.acadiacremation.com.