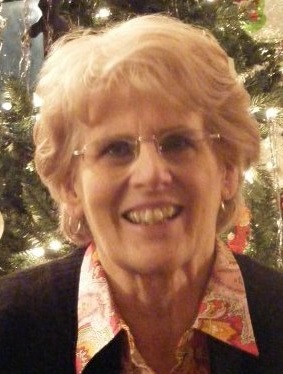 After 82 years of hoarding butter and actively avoiding exercise, Nancy Theresa Doyle left us to embark on her next adventure in the early morning hours of June 15, 2019. She spent her final days in this life basking in the love, laughter and stories of family and friends who came to visit.  Nancy was blessed with the care and undivided attention of her children who were devotedly by her side for nearly two whole weeks, taking breaks only to pee, eat, text, eat, sleep, eat, check Facebook and discuss where we should go eat.

Born January 30, 1937 in Elizabeth, New Jersey, Nancy would later claim ‘I saw the Hindenburg disaster from my house’.  Though we question her story, as she was only 4 months old at the time, we believe years later her statement must have been the inspiration for one of Sarah Palin’s more memorable quotes.  Nancy’s family later moved to Maine when she was still a little girl, and Bar Harbor became the special place she was always proud to call her hometown.

Likely a personality trait as a child, and certainly as an adult, when Nancy wanted something, she persisted until she succeeded – such as the time she set her sights on owning a shorefront lobster restaurant in Trenton.  Dad often said, ‘She used to be satisfied with a one-pound lobster, now she wants a lobster pound.’  Then he would sigh and go hide in the neighbor’s garage.  Despite having little restaurant experience at the time, Nancy and her plucky ragtag crew built Oak Point Lobster Pound into a local landmark, with scores of devoted fans.  She was forever proud of her achievement and success at Oak Point.

In subsequent years Nancy moved to the West Coast and lived in several places (she was partial to Vegas) and built a rather impressive resume working for some of the rich and famous, all the while praying for one to fall in love and marry her.  Finally deciding she had enough of earthquakes, riots, and her never-ending fear of freeway driving, Mom headed back East to be near her daughter and family in Millis, MA.  As Nancy’s granddaughters grew up and her babysitting income went down, she set her sights on going back Home, eventually settling in Ellsworth for her final years.  Until recently when her health declined, she enjoyed spending time with friends and family, cheering on the Red Sox and Patriots, watching Fox news, and playing and teaching online casino games to her youngest grandson.

Nancy is predeceased by her parents Tim and Gladys Graves; her sister Betty Ann Holmes; brother Jerry Graves; 3 ex-husbands Ernest, Jim and Tom; and her beloved son Stevie who died doing what he loved most – living where his family did not.  She leaves behind three adorable adult orphans, Debbie Kane and her ex-husband Brion; Michael Thompson and his ex-wife Jean; and Sheri Sabbag and her ex-husband Tommy (are you sensing a theme here?) six grandbabies – Christopher and Aaron Kane, Emily and Tori Sabbag,  Audrey Morrison and Cole Thompson; and two great-grandchildren, Camden and Dorothea Morrison.  She also leaves cousins, nieces, nephews and a lot of old and new friends, all with stories the orphans may not want to hear.   Oh, and an apartment filled with makeup, hair care products, overstuffed closets, random indecipherable online passwords and butter!

The family wishes to thank the incredible staff at Maine Coast Memorial Hospital for their professional, kind, compassionate care given to Mom during her stay, and for tolerating the noisy parade of visitors and our sometimes-inappropriate laughter.

n lieu of flowers, please make a donation to your favorite charity, help a person in need, or buy a bunch of scratch-off tickets.  She was most fond of one of these things.  Guess which one.

A celebration of Nancy’s life will be planned for later this summer.  God speed, Mom. You look fabulous!