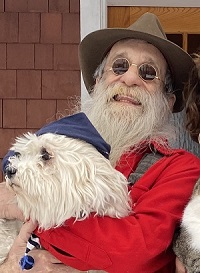 Alan deCheubell, 66, died at his Bar Harbor home on the evening of October 28, 2022. With his white and red cane in hand, and his dogs Ruthie, and later Moe, Alan was an iconic sight in Bar Harbor, where he held court regularly in retail shops, cafes, restaurants, and saloons alike.

The son of Edward and Sandra (Sanders) deCheubell, he was born in Hanover, PA, on March 3, 1956. Growing up exploring local woods and streams for Civil War artifacts, he was surrounded by a tradition of craftsmanship, showing an almost genetic aptitude to follow in the footsteps of his dad and grandfather, both carpenters, whose tools he treasured and used throughout his life.

After high school, Alan pursued his love of cooking, working in the kitchens of restaurants and sporting camps. He eventually worked his way to Bar Harbor where he cooked at the Town Farm Restaurant.

Despite formidable culinary skills, he could not resist the pull of woodworking and was employed over the years by several area builders, including spending more than a decade as the shop foreman for AB and JR Hodgkins in Bar Harbor.

His legacy of craftsmanship will be enjoyed by future generations in the work he created for local homes, estates, businesses, and institutions such as the Jesup Library. One particular triumph was the restoration of the circular wooden case on the 1896 town clock on Bar Harbor’s village green.

Eventually he went out on his own, establishing Alan’s Custom Woodworking. To meet the unique needs of his customers, he built his own oversize power tools including a porch-post lathe that featured a Volkswagen transmission to vary the speed and a 4-foot drum sander used to craft canoe paddles, which were prized as works of art.

Over the years, Alan created a unique urban homestead at his downtown Cedar Avenue property, restoring a small 150-year-old house and tending celebrated organic gardens. “Garlic,” he was fond of saying, “is a vegetable, not a spice.” The need for a structure to house projects and interests on par with the size of his intellect led to him eventually building a 1,500-square foot post and beam barn for his workshop, and many science and engineering projects including multiple trebuchets, which delighted those who attended his regular “Punkin’ Chunkin’ sessions on the Bar Island Bar. With close friends Dan Kirby and Heather Thayer, among others, he formed the “Bar Harbor Siege Engine Society.”

Even while dealing with failing eyesight that left him legally blind with only a few percentage points of clarity in one eye, Alan built a stunning, hand-crafted Rangeley boat lofted from 125-year-old plans. A high point was using that boat for camping and fishing on the lakes of the Rangeley region which gave birth to that beloved traditional form.

A commensurate outdoorsman, Alan loved to explore Maine’s deepest backcounty, often embarking on solo backpacking trips for weeks at a time in Maine’s 100 Mile Wilderness, Baxter State Park, and the Debsconeag Lakes area. It was while on an extended canoe trip on Mooselookmeguntic near Rangeley that his health challenges with seizures first appeared. Even after being evacuated by boat and ambulance to the nearest hospital, nearly an hour away, he continued to maintain his good humor and a positive outlook.

Undaunted as the seizures became more frequent, deCheubell became a licensed medical marijuana caregiver, constructing an arched greenhouse for his organic grow operation. He also served as adjunct faculty at College of the Atlantic, where he taught eager students the wood-working skills to build their own kayaks.

As his vision deteriorated and seizure challenges increased, he cherished the retinue of friends and disciples who helped him with everyday tasks and whose efforts allowed him to remain independent in his home. Try as they may, seldom could any of his expansive network of friends beat him at chess.

Alan’s intelligence and aesthetic sensibility were second only to his sense of humor and whimsy. A well-read man with deep interests in science, engineering, nature and philosophy, his talents extended to crafting intricate paper kites, a Flintstones-style foot-powered vehicle, and a functional ¾-inch-scale replica of a World War I German triplane, which featured a s model of himself in the cockpit.

Alan strived to wean himself off anti-seizure medications over the past several years as the blackouts ebbed, until the major seizure that took him in his sleep. Prior to that, he had not had a major episode in nearly a year.

He is survived by his caregiver Eloise Schultz of Bar Harbor, mother Sandra of Columbia, PA, sisters Lori deCheubell of Vero Beach FL, and Alane deCheubell of Columbia, PA, and Janine “Nina” Young, wife of Mark, of Millersville, PA, an aunt, Jeanne Ferguson of Fuquay-Varina, NC, and several nieces. He was predeceased by his father Edward, brother Michael deCheubell, uncle John DeCheubell, and two aunts, Joan deCheubell and Yvonne Keeney.

A memorial service will be scheduled in the spring. Donations in his memory can be sent to the Bar Harbor Food Pantry, PO Box 434, Bar Harbor, Maine 04609.