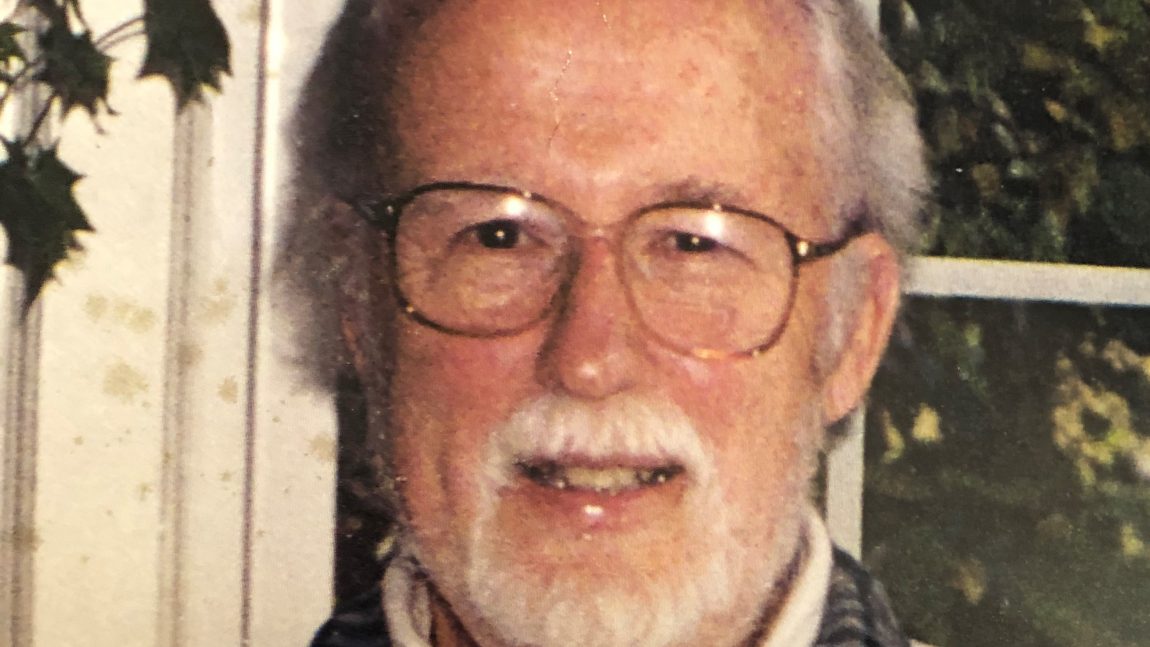 Deane William Ferm passed away peacefully on November 23, 2019, in Bar Harbor, Maine, after a period of declining health.  He was born May 22, 1927, in Lebanon, Pennsylvania (which he claimed explained his love of Lebanon bologna), the 4th child of Vergilius Ture Anselm Ferm and Nellie Agnette Nelson Ferm, themselves children of Swedish and Norwegian immigrants, respectively.  The eldest of their five children, Vergilius, died in infancy, the sole daughter, Vergina, passed away from Scarlet Fever in her early teens, but “SarDeane”’s two brothers, Vergil Harkness “Sonny” Ferm and Jules Robert Livingston “Geeko” Ferm, were his best friends, and fiercest competitors.

He grew up in Wooster, Ohio, attending an accelerated program that allowed him to skip from the high school to the College of Wooster after three years.  He “lost” the year he had gained when he enlisted in the US Navy before the end of World War II, receiving an Honorable Discharge, after which he returned to graduate from the College of Wooster, majoring in Philosophy under his father, the head of that Department.  From Wooster he attended Yale University receiving an M.A. and a PhD from the graduate school in Religious Studies, and a B.D. from Yale Divinity School.

His first position was as the first member of the new Department of Religion at the University of Montana in Missoula, after which he was invited to become the Dean of the College Chapel at Mount Holyoke College in South Hadley, Massachusetts, where he stayed over 20 years.  Upon his departure, he was honored by the Black Students’ Association for his efforts to promote the equal treatment of all people.  His years after that were spent in a variety of teaching positions, largely following the positions taken by his second wife, and he last taught at Colby College and the University of Maine at Farmington. He volunteered at hospitals in the Waterville area.

He authored nearly a dozen books, numerous magazine articles in a number of publications ranging from The Christian Century to Redbook, and contributed to a number of collected works, in the fields of religion, ethics, and in particular, liberation theology.  He was a supply preacher, often serving Fisher’s Island while at Yale, and many communities in Western Montana while at Missoula.  He taught his children about various religions each one being associated with a bar of soap from a motel where the family stayed while he was preaching at the local church.

He was a gifted musician, spending summers in high school at Interlochen, playing the French horn, and a member of the Cleveland Symphony where his father had to drive him to practices and performances until he was old enough to get his driver’s license.

His two marriages ended in divorce but his first marriage produced four children.  He celebrated his Scandinavian heritage by taking his family with him for a year to Upsala, Sweden, and spent other sabbaticals at his beloved camp on a lake in Mercer, Wisconsin.  He ended up in Smithfield, Maine, a town he truly loved as well.

He loved musky fishing (his trophy muskies are displayed in bars and restaurants throughout the Mercer area as well as in Smithfield, Maine), gin and tonics, and grilling pork steaks on an open fire with his buddies while drinking the cheapest beer they could find.  He was a fierce competitor, and turned everything from shooting PIG in basketball to whiffle ball to card games into contact sports (“spoons” was particularly rough).  He also loved anything to do with Marilyn Monroe – and, as his kids, we knew we were also in his heart, although we did face some fierce competition with the above.

Deane was blessed with many friends through-out his life, some were co-conspirators, some were people who looked out for him when he got into mischief.  These friends, too numerous to mention all, included Rabbi Solomon Kaplan (together with a local priest, there were many times back in the 1960’s when a minister, a rabbi, and a priest walked into the bars of western Massachusetts!), Mozelle Sawyer of Florida with whom he shared the same birthday and time together at Interlochen, Brett MacLeod of Smithfield, Maine; Bunny Gilbert and her daughter, Vicki Catlett and husband, Larry of Turner, Maine; Fishing Guide Mitch Babic, Jere (Ruth) McGaffrey and daughter, Beth Wetzler, who had a home across the lake in Mercer, Wisconsin, and most of all, his brothers and their children, his nieces and nephews.

He suffered a severe stroke in July, 1990, but clawed his way back to regain his speech, his motor skills, and his driver’s license.  He never lost his sense of humor.  He attributed his recovery to the “3 laws of learning:  repetition, repetition, repetition” and his motto “Never Give Up.”

He was predeceased by his parents, all of his siblings, and his beloved adopted daughter, Laurie Rose, who was a proud member of the Sisseton Tribe of the Sioux Nation as well as an integral member of the Ferm Clan.

He is survived by his loving children, son, William (Bill) and his wife Ninette, of Mount Desert, their sons, Edward Deane (“Ned”) and his wife, Maria Faust, of Copenhagen, Denmark; Nils and his wife, Nicole and great grandson, Erik of North Yarmouth; Jacob; William, Jr. (Billy) and his wife Shoshona Smith and great grandson, Abel; and Carl, all of Mount Desert; his daughter, Linnea West and her husband, John, of Tennessee, and daughters Viola (Vi) Williams and her husband Andrew, of Texas, and Jenny, of South Carolina; and son Robert (Bob) Ferm and his son, Robert (Bobby) Ferm and daughter Abigail (Abby) Ferm, all of Massachusetts, sisters-in-law Betty Swan of Connecticut and Sonja Olson of Vermont, as well as beloved nieces and nephews.  Anyone wishing to remember Deane is encouraged to do so by doing something kind for someone else and by remembering to “Never Give Up.”