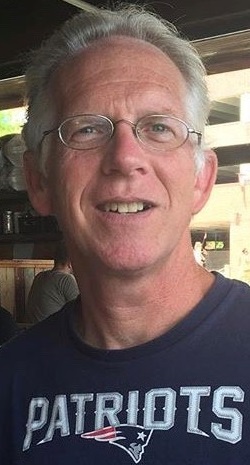 After a courageous battle with brain cancer, Daniel R. Champlin, 61, died peacefully and comfortably on February 12 of 2022 at home, with his loving wife, Tatyana and his sister, Martha by his side. Daniel was born on March 13, 1960 in Sanford, ME to Ralph and Marjorie (Staples) Champlin. After graduating high school, George Stevens Academy in Blue Hill, ME Dan married his first wife, Catherine Pond Champlin who gave him two beautiful daughters Michelle and Mary. He married Tatyana on February 14 of 2011. The simplest pleasures in life brought great joy to Dan. He enjoyed a cup of coffee in the morning, watching football and spending time outdoors. Running was his hobby. He motivated many people in his family including sister, Martha; nephew, Matt; and stepdaughter, Dasha. His favorite race to run was TD Beach to Beacon 10K in Cape Elizabeth, ME. Dan had a successful career in retail. He worked as a store manager in Greater Boston, MA for many years before returning to Maine in 2009. Where he continued his career as a store manager at Burlington in Bangor, ME. He was always valued for his hard work, fairness, kindness, and care.

The family would like to thank the Oncology Team of Northern Light Cancer Care, doctors, nurses and staff for their advice, support, and all-around best care. Much gratitude to Northern Light Home Care & Hospice for support, comfort, and compassionate care.

Dan’s warm heart and physical presence will be missed forever.

Condolences may be expressed online at www.acadiacremation.com