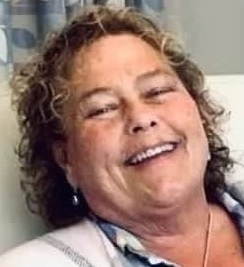 Seal Harbor – Michele Croan, 60, died August 20, 2022, from cancer at her home surrounded by her loving husband and friends.  She was born May 31, 1962, in Palm Beach, Florida to Arthur and Hortense Abbott.

As an infant she moved to Seal Harbor and graduated from MDI High School in 1980.  After graduation she worked in the restaurant and hospitality area where she was best known for her Margaritas at Miguels restaurant in Bar Harbor.  Eventually owning and operating Nature’s Way Café in Bar Harbor.  Next, she purchased her mother’s business First Express and operated it form many years.  She then sold that business and teamed up with her husband, Charlie, to open a doggie day care in their home called Acadia Pet Services.  At this time, she joined the board of directors at the Hancock County SPCA.  There she worked tirelessly for the animals in its care.  Personally, Michele was a very talented crafter who enjoyed felting, knitting, sewing, and doing all sorts of projects.  She also enjoyed traveling and camping.

Michele is survived by her beloved husband of 21 years Charlie Croan of Seal Harbor; her son Chuck Croan and his wife Christy of Surry; her aunts Susan Grindle and Jan Collucci of Seal Harbor; her brother Jack Cunningham and his wife Beth of Bar Harbor; her five grandchildren Devon Roberts and partner Morgan of Westerly, Rhode Island, Kody Croan and his fiancé Paige of Unity, Rachel, Kailyn and Emma Croan of Surry and two great grandchildren Atlas and Asher of Westerly.

There will be no service, however, a Celebration of Life for Michele will take place on a date which will be announced later.  In Memory of Michele please do one act of kindness every day.