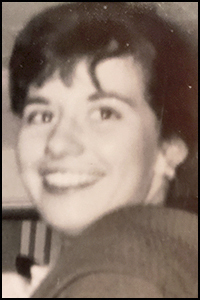 SURRY Geraldine (Jerri) Lee Rand-Cook, 76, of Surry, Maine, passed away at her home October 8, 2018 with her children by her side, after losing her battle with cancer. She was the daughter of the late, Cecil Rand and Marian Rand- Philbrick. She was born in Portland, Maine, July 4, 1942.

Jerri was predeceased in 2016 by her loving husband of 55 years, Donald L. Cook Jr. She was also predeceased by her granddaughter, Cheyanne M. Jorge, and her sister, Cecilia Berwick.

Jerri lived and graduated from the Hinckley School June 1960, and met and married Donald February 1961 in Bangor, Maine, and inherited a 8,6, and 2 year old!

Jerri’s favorite hobby was reading, and she bestowed this gift on all her children. She believed you could do anything and go anywhere, if you could read. ” The World Was An Open Book.”

Jerri admired Jacqueline Kennedy very much,and often quoted her,”There Are Many Little Ways To Enlarge Your Child’s World.Love of Books Is The Best Of All.”

She was a loving wife, mother, and friend. She enjoyed watching the cooking and gardening shows. Jerri was well known for her blueberry and apple pies!
She supported Donald, in all his endeavors, since she was a young bride of eighteen. He came home one day, and said, “Jerri, I want us to move to Alaska!” They had many adventures together, from mining for gold, fishing, camping, and traveling extensively throughout the world.
Jerri truly loved talking to everyone she met. No one was a stranger to her, and her home was open to all.

In lieu of flowers, the family would like a donation made in Geraldine’s name to the Cancer Research Society.

“Richer Then Gold”
By Strickland Gillilan

You may have tangible wealth untold;
Caskets of jewels and coffers of gold.
Richer than I you can never be
I had a mother who read to me.

We shall miss you, Mom.
Thank you for loving us, supporting and encouraging us to be our best.