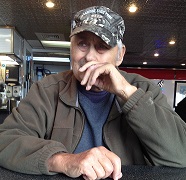 Jerry or Coon as he was called by his friends will always be remembered as a hard worker and a joker!  Many times people will say to family members do you know what your Dad did or said.

At Jerry’s request a graveside service will be held in May where both Jerry and Gloria will be committed together and a time of life celebration will follow.